Jul 31, 2014 / Comments Off on Domaine la Sarabande – Faugères, France / Brendan
Domaine La Sarabande was established so that Australian winemaker Paul and his Irish wine Isla Gordon could fulfill their dreams of making serious long living robustwines. The vineyards have been carefully selected to establish a balanced mix of schist soils, good drainage, good aspect and a mix of young and very old vines. The vineyards […]
read more

Jul 31, 2014 / Comments Off on Il Passero / Brendan
Il Passero is an Italian style offshoot of the Sparrow. There are two wines, a small parcel of Nebbiolo from Gundagai in NSW and a Sangiovese from King Valley in Victoria. They are bottled exclusively for Sparrow & Vine. Nebbiolo is the noble grape variety of Piedmont in North West Italy and often draws comparison […]
read more 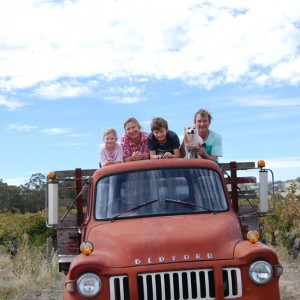 Jul 31, 2014 / Comments Off on Smallfry Wines / Brendan
Wayne Ahrens and Suzi Hilder are the custodians of some exceedingly fine vineyards. Both from grape growing families of long standing they planted a vineyard in the Eden Valley and purchased a beautiful block of ancient vines in the Barossa Valley sub-region of Vine Vale. With patience, intelligence and sheer graft these vines are now […]
read more

Jul 31, 2014 / Comments Off on Sparrow & Vine Wines / Brendan
Sparrow & Vine is my ongoing winemaking baby. The first vintage was 2010 and it has always been based on fruit from the Doecke vineyard, on Gawler Park Rd in the Eden Valley sub region of the Barossa. The Eden Valley is higher and cooler than the Barossa floor and the fruit ripens later, with […]
read more